Olympic History – the first gold medal for the Czech Republic

The history of Czech competitive rope climbing began in the Olympic Games in 1924. Bedřich Šupčík won the first Olympic gold medal in this sport for the . His winning time without using his legs on an rope was 7.2 seconds. In the same event, another Czech gymnast, Ladislav Vácha, received the bronze medal for a time of 7.8 seconds. After these Olympic Games the 8 meter competitive event was abandoned in the

The Resurrection of Competitive Rope climbing

The turning point in the history of Czech competitive rope climbing occurred in early 90´s, when Radko Valík from Sokol Příbram had the idea of organizing a competition in the rope climb, in honor of Bedřich Šupčík, the first Czech Olympic winner. In Příbram, in 1993, the first modern event in rope climbing made its debut, named the B. Šupčík´s Memorial. Rules of the climb in this competition were the same as in in 1924. The climber began in a seated position on the floor, with one hand grasping the rope and the other hand in the air approximately at the level of shoulders. After an acoustic starting signal the competitor could climb without the use of legs, employing the hands only. The length of the rope was  8 meters, as in  . The Memorial was a great success and has been held every year since.

In a short time rope climbing became popular across the country, and competitions were established in various cities. At the start of the new century climbers could compete in more than ten events on the rope. The first official Championship in rope climbing in the Czech Republic occurred in 2001. All competitions during the year act as qualifiers for the National Championship, which includes the 20 – 30 best climbers of the season.

A year before the 2004 Olympiad in Athens the first repeat of the 1896 Olympic event was held, using a 46 meter rope.  Since then, each year there is a special competition on this extremely long rope, which has become quite a show for spectators and a very exciting event for competitors.

Initially, there was an effort to climb according the 1924 Paris rules. As mentioned before, the length of the rope was , and climbers started in a seated position with one hand on the rope and another at the level of shoulders. During the climb, after the starting signal, the legs could be moved - in a kicking motion -  but could not grasp the rope. The climber's time was recorded when he touched the final mark at . 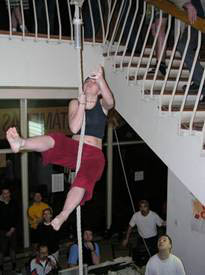 However, it became obvious these rules were inadequate. Some climbers used their legs at the beginning of the climb (they pushed themselves off from the floor with their legs), or started climbing before the acoustic signal (they grasped the rope with both hand before the signal), and the hand-held stopwatch was a poor timing mechanism. Referees were overly tolerant. It became necessary to ensure the uniformity of all competitions. 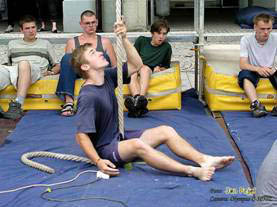 Over time the present set of rules have evolved. Today climbers start also in the seated position; one hand grasps the rope anywhere the climber wishes, but the second hand must be on the starting button of the electronic timer (see picture on right). The second hand may release the button only after the acoustic signal. If the button is released before the signal, the time is not recorded and the climber must repeat the climb. At there is an electronic sensor, which reacts to the touch of the hand (see picture on left). This sensor is connected with the starting button. So the recorded time is regulated, with the precision of hundreds of a second. Also, it is crucial that the climber lift the legs from the floor before the seat, or at the same moment. With this rule all climbers start without bouncing and the timing is correct. The implementation of these rules led to a degradation of times on the . So it is not possible to compare the best times across decades.

Junior men and women climb a shorter rope – . Its diameter is about (). In each competition climbers are allowed 3 or 4 attempts. Climbers compete on an individual rope or on two ropes simultaneously.

Best climbers and Records on Rope

In 1993 the first modern record was established for the :  trooper L. Cimburek won the event in  9.09 seconds. Considering the times from the Olympiad in on the same length of rope, it was clear that this time would be very quickly overcome. On the other hand no one was certain if the gold medal time of 7.2 seconds, set by Šupčík in , would be challenged. 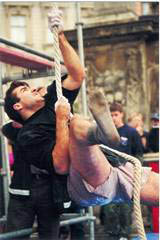 Climbers from Sokol Bratislava led the way from the very first modern competition.  Martin Masár - a very dynamic climber - excelled. From the very beginning in 1994 , he won every match and gradually improved his own record. In 1997 Martin set the Czech record for with the astounding time of 5.58 seconds. In the following years he confirmed his skill with very good times under 6 seconds. However, in 2000 Martin lost an event and decided to terminate his carrier.

Martin Masár was the first czech climber to break Šupčík´s time of 7.2 seconds, which is still regarded as a “magic time to beat”. Besides Masár, sport club Sokol Bratislava has had several other good climbers, especially Martin Vašek and Tomáš Trník. They both beat Šupčík´s time. Vašek has his own personal record of 7.02 seconds.  Trník's best time is 6.70 seconds. 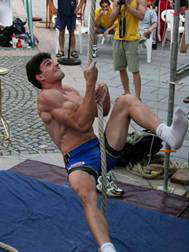 In 1997 another legendary rope climber, Josef Křivánek, from Troubsko, started his successful carrier. In his first event he was the sixth with a time over 9 seconds, but after one year of training he became the second man in Czech rope climbing on rope (before this date he climbed as a junior on rope). In the years 1998 - 2000 he was usually second after Masár, losing by only tenths of second. In 2000 Masár won his last match at 5.91 seconds (Křivánek was the second with a time of 6.27), and after this time he retired from climbing. So from this date the “epoch of Josef Křivánek” began - lasting more than 4 years. Křivánek won all 42 competitions in which he climbed in this period. His performances peaked in 2003, when he set his own record on the rope – 5.84 seconds. Křivánek is also the holder of the best time on rope - at 15.44 seconds. In march 2005 Křivánek won his last event with a time of 6.51,  and after 10 years of competitive climbing, retired from competitive climbing.

Martin Masár is the holder of the best time on rope – 5.58 s. However, the significance of his record is reduced because the rules at the time of his climb allowed a bounce with the legs from the floor and also a premature start (these are evident from the video of his record climb). In 2003 Josef Křivánek climbed the rope in a time of 5.84, when the newer, stricter rules applied. Climbers frequently discuss the question: who was faster, Křivánek or Masár? Videos of both record climbs show the speeds of both climbs were - to the eye - approximately the same.

Young Climbers Appear on the Scene

Besides Křivánek and Masár, there are other good climbers who have broken the 7 second barrier. One of the greatest of Křivánek´s rivals was Michal Nedomlel, a good rock climber, who broke the 7 second barrier in 2003 with a time of 6.86 seconds. The last couple of  years Michal has taken a competitive break, but his time will soon come. 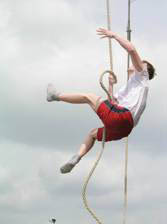 So far this year, five young climbers set personal records under 7 seconds. One from this group will surely be the new Czech Champion for the year. Th best of these is Martin Matěj, who was timed at 6.55 seconds (picture on left). Only 3 hundreths of second slower was Štěpán Muchka with a time 6.58. Probably the biggest favorite for the year’s Championship is Libor Hroza, who is also the best speed climber in , as well as in international contests. On rope Libor has so far recorded 6.70.

Two leading Czech gymnasts, Aleš Novák (picture on right) and Aleš Kočí, both from Sokol Šternberk, have equal times of 6.91 seconds. It is very likely that all these climbers will improve their records very soon, probably in the next competition.

This year there were 7 competitions as qualifiers for the ultimate contest of the season, the Championship of the Czech republic, which will include the best 20 climbers. Current winning times are about 6.5 seconds. But it is likely that during the Championship there will be a better time, perhaps under 6 seconds. In the near future climbers will surely perform the 8 meter climb in under 6 seconds.

To see the Records of all Czech Competitions, click here

Return to Page 1 of this Section

Return to the HomePage of  www.johngill.net