A Rambling Discussion of the Links between the Two Sports . . .

" . . . in a broad sense, anyone who moves is a potential gymnast. When that movement has some special meaning; when it is exhilarating; when it increases human efficiency; when it is elegant or when it is loved, then that is gymnastics" - A. Bruce Frederick in Gymnastics for Men (1969)

Comment:  Most of the discussion that follows pertains to men's gymnastics. These days, when people think of gymnastics they frequently imagine small girls flying around the uneven bars or prancing across the balance beam, but historical gymnastics - in the 1700s and 1800s particularly - was largely a male enterprise, and gymnastic climbing activities were, for the most part, restricted to that gender. 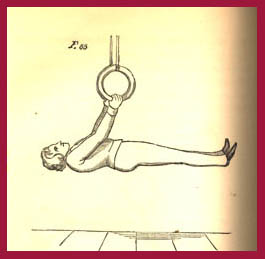 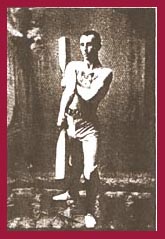 During the 19th century and much of the first half of the 20th century the word gymnastics described many activities, including horizontal bar, parallel bars, horse, and still rings, but also weight lifting, yoga, group calisthenics, indian club juggling, human pyramid building, pole vaulting, rope, pole, or ladder climbing, etc. - forms of exercise unrelated to the modern sport of gymnastics. 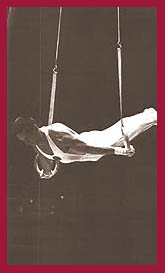 "The 1952 Olympics marked the start of the modernization of gymnastics . . . The 1954 World Championships in Rome saw the stabilization of the programme as we know it today . . . the individual events fixed at compulsory and voluntary exercises on six apparatus for men and four for women" - John Goodbody in The Illustrated History of Gymnastics (1982)


Elite Athletes: Gymnasts & Climbers Today . . .   Are there elite gymnasts who are also serious climbers?  Very few, I suspect.  Modern gymnastics is so demanding and time intensive that only a truly exceptional person could pursue both. Gymnastics training programs - highly structured and inflexible - demand an athlete's total commitment. However, I have come across a few individuals who were high gymnastic achievers, but who left the sport for climbing. Again, not many.  My guess would be fewer than 5% of climbers were, or are, serious gymnasts. On the last page of this section you can find a little more on this topic.


Now, it's on to a look at actual climbing activities within historical gymnastics
A Trip into the Past . . .